I have been trying to dig out a good & funny intro line to start this article but none seem to be coming at this time. So I'm just gonna straight to the point.

What is Bitcoin?
Bitcoin is a digital or virtual type of money. Digital in the sense that, it is not printed like your Naira or Dollar. Virtual in the sense that, it is not physically felt or produced like other commodities that can serve as a medium of exchange, store of value and unit of account. I believe we understand that 'money' is not limited to our fiat currencies alone. Money can be anything. Anything that can perform the main functions of money can be used as 'money'. As you can exchange your 1000Naira for a plate of eba and egusi soup. You can also exchange your iPhone7 for that same plate of food if you want to. Am certain Mama Kabiratu won't mind. It is satisfying the same desire.

Now, defining bitcoin technically, Bitcoin is a kind of money or peer-to-peer payment system that is digitally created and handled through encryption techniques with transactions taking place without any intermediary. However, transactions are confirmed by network nodes, documented in a public ledger which is called the blockchain.

I will explain, trying my best not to bore you with the history and technicalities. I need to keep you reading till the end. That's where I get to advertise Nigeria's most reliable Bitcoin Wallet Provider - Jostpay.

Bitcoin was released as an open-source software. The system works without a central repository or single administrator. This led to the U.S. Treasury categorizing bitcoin as a decentralized virtual currency. As I mentioned, bitcoin is not printed, it is generated. It generated by what is called Bitcoin mining. Bitcoins are generated as a reward for payment processing work in which bitcoin miners offer their computing power to verify and record payments into a public ledger which is called the blockchain. The block chain serves to confirm transactions to the rest of the network as having taken place.

However, you don't have to be a miner before you can own bitcoins. Bitcoins can be exchanged with your fiat currency (Nigerian Naira, West African CFA franc, USD, Pounds, etc) in an exchange. Just like you exchange your local currency for Dollars or Euros when/if you wanna travel or spend over the internet. We run a digital currency exchange platform - InstantExchangers

Like I initially mentioned, money can be anything. As long as this 'anything' can function as a medium of exchange, store of value and unit of account. Understand that value is what is being exchanged not ‘money’. Whatever is accepted by someone as a thing of value can be used as money. The reason Microsoft, TigerDirect, WordPress, Dell, Tesla, and many more accepts bitcoin is because they see value in it. Click to read more about this.

Now, you are about to ask, why should I exchange my money with bitcoin when both can do the same things? I'll give you some reasons why.

-Transactions is super fast and cheap. Bitcoin transaction charge is not more than 0 - 2%.
-You can send Bitcoins from anywhere to anywhere. You will be sending it directly to the receiver, through what is called a Bitcoin Wallet.
-No paperwork or Id card needed to send or receive. Straightforward.
-Bitcoin has an appreciating value in case you're a speculator. As at now, 1 Bitcoin equals 632 USD.
But understand, it functions like your money, it can be up and it can go down.

So just like you need a wallet and a bank to keep and control your valuables, you'll need a Bitcoin wallet provider to help you manage your Bitcoins. That is send/receive bitcoins and exchange bitcoins to cash in banks. Jostpay is Nigeria's first and most reliable Bitcoin Wallet Provider. With over six years experience in the digital currency market space.

You can friend us social media for more information or you could reach out to me via LinkedIn.

It is like a physical vault that is not online, all coins are safely stored in this vault until it is needed by you. This model is the best way to safe all your coins securely.  As soon as you receive coin into any of your cryptocurrency address, it will need to reach 1 confirmation from the blockchain network before your coin will be safely stored in the offline wallet vault

The only disadvantage of the offline wallet is that, all transactions is processed manually, every  withdrawal to any other address is signed into the blockchain manually, so, sending your coin will NOT be deducted instantly from your wallet, it will be deducted as soon as it has been processed to the wallet address specified.

But be informed that, security is the main … 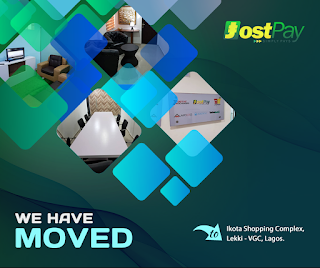 We Have Moved!! We Have a New Office Location

It’s been 4 years since jostpay has been operating without a defined office space, and we are grateful to our wonderful customers for the trust and support given over the years. Even without seeing us, our users trust us.

We all at jostpay appreciate you for constant patronage and to say, we are back and even better and faster.

Once again, We would like to thank you for your support, patronage and to wish you the best in all your endeavours.