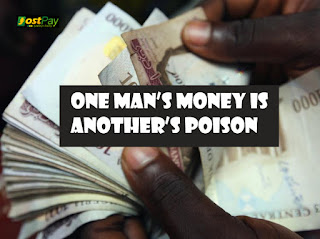 The reason you smile showing off your entire set of teeth, walking around so confidently when you have money on you and the reason you keep quiet like a duck that just discovered that its wings are not meant for flying is because you have knowledge of what money can deliver.

Money, according to modern economics has three functions - a medium of exchange; a unit of account; a store of value. Its main function is that it serves as a medium of exchange. That’s the reason you can stretch your hand with a coloured paper or card made out plastic in it to the guy who sells laptop and he won’t try to punch you in the face. But you can also stretch that same hand with your wrist watch in it and he still won’t try to punch you.

Understand that value is what is being exchanged not ‘money’ (lets quote that). Whatever is accepted by someone as a thing of value can be used as money. Money can be anything. So far it can serve as a medium of exchange. Money can be your gold or your wisdom. It can be your house or your dog. It can be your maize or your cap. Money is what you say money is. If it is needed or wanted, then it is money. If it is scarce and not littered everywhere, then it is money.

Now, Bitcoin as a new kind of currency may have been invented some few years ago but what it fulfills is no different to what the barter-like-method was doing many centuries ago. It is doing the same thing cowry shells were doing thousands of years ago. I was around then, so I know what I’m talking about. (where’s a wink smiley when you need one)

For bitcoin to function as a medium of exchange, it automatically functions as a unit of account. A unit of account is something that can be used to value goods and services settle debts and make calculations. The pizza is valued and purchased using bitcoin.

So now you can see, what makes money, money; is what makes bitcoin, money.
Thank You For Reading Through.